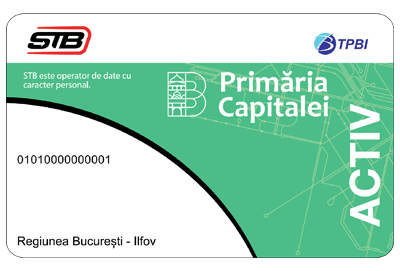 When first issued, the Activ nominal card is free of charge, and can be obtained on the basis of the ID, at any STB SA Center for Issuing and Reloading Cards.

The Activ nominal card is not transferable. Thus, it can be used only by the holder.
If stolen, lost or damaged, the automatic charging system assures the possibility to transfer the remaining travel titles on a new card (the remaining credit in the electronic wallet and/or the remaining unused period in the subscription).
When issued for the second time, the price for the new card will be 4,7 lei.

The non-nominal Activ card can be obtained for 3,7 lei at any STB SA point of sale. It can be reloaded at any STB Center for Issuing and Reloading Cards, vending machines and ATMs.

The remaining credit on the non-nominal Activ card cannot be recovered if it has been stolen, lost or damaged.

Transportation cards will be used only under the circumstances they were issued for.