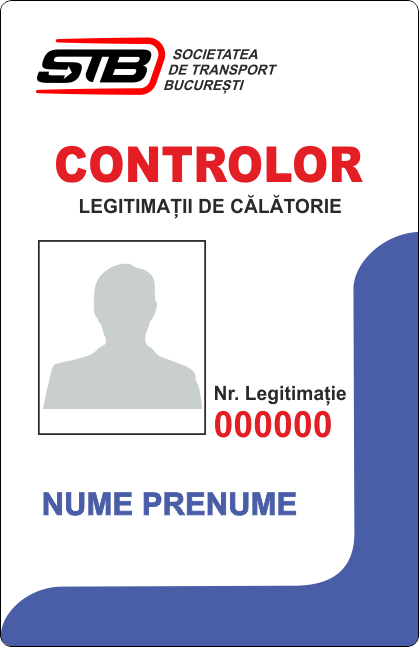 Control activity is done with a specialized control body, in order to ensure optimum safety and order conditions within the surface public transportation vehicles and to combat fraudulent trips.

During their activity (depending on the season) the controllers wear blue vests, with the STB SA logo (on the front) and the CONTROL inscription (on the back), or blue polo shirts, with the same inscriptions.

A decent outfit, consisting of light-colored shirt and dark-colored trousers, is imposed by STB SA on the employees with control duties.

When asked by the STB SA controllers, passengers must provide the tickets they are using and the owners of nominal subscription or credentials must provide, on request, their IDs.

According to art. 18, Ordinance no. 2/2001, regarding the juridical regime of offences, the offender is bound to provide to the controller, on request, his/her ID. In case of refusal, the controller can call in the police, the constables or the local police.

Regulation regarding civil sanctions are specified in The regulation of the local public transportation community service for Bucharest and Ilfov county. 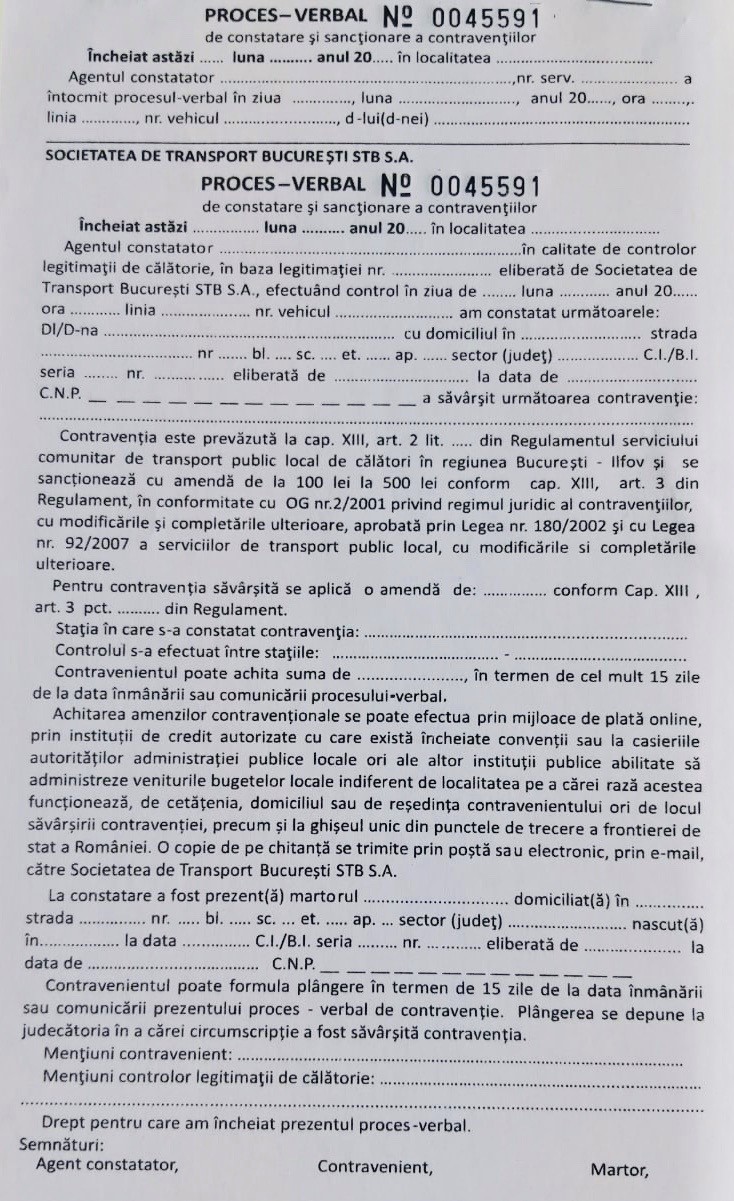 The following facts are considered offenses in the field of the Public transportation service for passengers in Bucharest and Ilfov County and are sanctioned with a fine:

a. The journey without a ticket (issuer, operator, fare and period of validity) validated at the beginning of the trip, or without another document to allow the journey;

b. The journey with a false ticket or with one that is modified or erased;

c. To prevent, in any way, the assigned staff designated by the transport operator/authorized transporter to carry out their duties within the public transportation vehicles, in the stations or in the terminals;

d. Physical or verbal abuse against the assigned staff designated by the transport operator/authorized transporter in the course of their duties within the public transportation vehicles, in the stations or in the terminals;

e. To request the opening of the doors of the public transportation vehicles between stations or at the traffic light;

g. Unauthorised interference upon the equipment/ facilities of the vehicle;

h. Activation of the alarm without an imminent danger for the vehicle’s or passengers’ safety;

i. Causing any kind of disorder when getting in or out of the vehicle or when inside it;

j. Putting up posters inside or outside the vehicles or in the stations, except where such actions are done within commercial contracts signed with the operators, with the contracting authorities or with ADTPBI;

k. Damaging or soiling the vehicle, in any way;

l. Conducting unauthorized commercial activity within the vehicle or in the stations;

m. Smoking or drinking alcohol within the vehicles;

o. Throwing any kind of objects out the window or out the door of the vehicle;

r. Transport of materials which could inconvenience the other passengers, by the smells they emanate, by burning, corrosion or filth;

s. Transport of birds or live animals, except accompanied dogs with leash and muzzle, or small animals held in the arms, but in compliance with OUG 55/2002;

The referred contraventions are in accordance with the regulations contained in the Government Ordinance no. 2/2001 regarding the legal regime of contraventions, approved with amendments and completions by Law no. 180/2002.
According to OG 2/2001, for contraventions committed by juveniles less than 14 years of age, the fine for the offense shall be reduced by half.
The contravention fines can be paid online (on the www.ghiseul.ro platform, at this link https://www.ghiseul.ro/ghiseul/public/amenzi), through authorized credit institutions that have signed agreements or at the cashiers of the local public administration authorities or in other public institutions entitled to administer the local budgets irrespective of its residence, the citizenship or residence of the offender or the location where the offence took place, as well as at the single window in the Romanian border crossing points. A copy of the receipt will be sent by mail or e-mail to the Bucharest Transport Company.
The offender can pay, within 15 days from the date he/she has been handed out or communicated the report on the offense, half of the minimum fine provided by law.One can pursue the report on the offense within 15 days since it has been handed out or communicated. The complaint will be submitted at the courthouse in the district where the offence was committed.